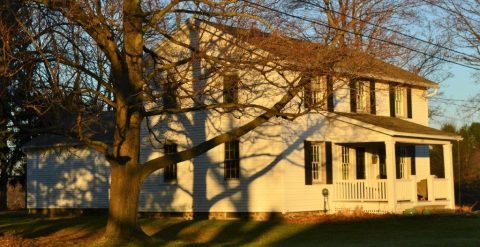 According to town records, this house and farm date back to 1825. The 70-acre property, first owned by early pioneer William Stottle, was sold to the Stryker family who held it for three generations. In 1906 it was sold to present owner Carole Thom’s grandfather, William H. Daugherty.  At the time, Stryker Road was simply a farm lane separating the house from the barn.

During the early part of the 1900s, the farm produced grain and was also a dairy. To William Daugherty, as it was with most residents of Chili then, farming was a business, a livelihood, and a way of life. And yet, no matter how hard a farmer worked, sometimes outside events and influences could devastate a farm. Fires and weather-related problems could spell disaster. In the Daugherty’s case, it was the Great Depression. The farm succumbed to foreclosure in 1935.

Thirty-eight years would pass before Carole’s father had the opportunity to buy back his homestead. Anna Hauslauer who owned the farm in 1973 had passed away and, once more, the Daughertys were back at 122 Stryker Road and all its memories. But now it was time to get back to the business of farming. For many years, William farmed hay until the Federal Tax Bureau took him to court to deny that hay farming was a business. A man who kept meticulous records of the income and expenses would win a landmark case in the annals of agriculture.

When William passed away in 2002, the property was turned over to Carole. She has made repairs to the barn siding, painted the barns and installed metal roofing. A Morgan horse weathervane adorns the barn to honor the Morgan horses raised on the farm by Carole and her daughter Jennifer. Over 35 foals were born during these years and many have become champions in the show ring.