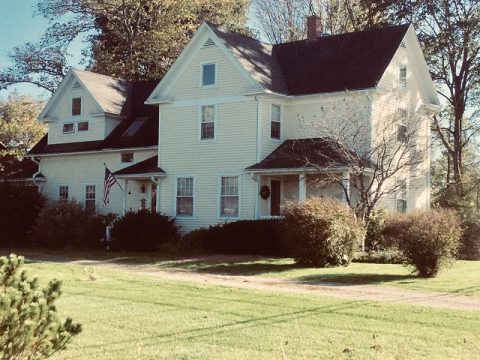 Chili has added another home to its historic landmark system. The Archer Homestead at 150 Archer Road, over 100 years old, came to the attention of the Chili Historic Preservation Board this past year. An investigation by board members resulted in the successful inclusion of this historic place. This stately Victorian home sits on a slight rise on Archer Road. The property has been in the family of Sandra Maloney Foley for three generations. Mrs. Foley’s grandfather, Michael Maloney purchased the home in 1921.

As we entered the driveway we passed a lovely garden, designed and planted for Mrs. Foley’s grandmother by her father in the shape of New York State. Mrs. Foley met us on the back porch and led us into a laundry room, formerly her grandmother’s summer kitchen. We then entered a central hall with access doorways to the kitchen on the left, and a powder room on the right. On the south wall of the hallway were 20 to 30 family pictures and a historical photo of 150 Archer.

As we enter the hallway we catch our first view of the chestnut trim that runs throughout the house, never painted and lovingly cleaned and treated with wood oil. At the end of the hall are stairs to the second floor. Directly ahead, we find ourselves in the great room created by removing a upstairs bedroom. There is a soaring ceiling, sliding doors to the deck, and skylights that wash the floor with light. Near the west wall of the great room, in a brick alcove, sits a very large Vermont Castings wood stove that vents through a multi-story pipe reaching to the roof top. On the north side of this expanse is a dining room, and around the corner a formal entrance to the house. A vestibule leads into the formal dining room. Off the dining room and the front of the house is the original parlor room space. Some bedrooms on the second floor open to the hallway with a view of the great room below. The rest of the second floor contains a central hall to bedrooms and a master suite.

And last, but not in any way least, we headed back downstairs to the kitchen. Martha Stewart could walk in and say, “Oh my, Oh my!” The redesign incorporated much from the original kitchen. The first thing you note is a center island—not a usual island, but one which holds her grandma’s pastry counter with pull out bins that hold numerous baking flours. The wood counter top is surrounded with glass canisters for sugar and flour, recipe books and modern cookers; to add another touch of authenticity the drawers have original pulls. Especially designed for this kitchen are the Shaker-style cupboards, color matched to the chestnut woodwork, blending in perfectly to the 1898 era. Below the cupboards is a breakfast bar with stools. Directly opposite on the south side of the long hall is the original chestnut pantry cupboard, originally eleven feet long, but shortened to eight feet to adapt to the kitchen wall. It has all original hardware and glass doors.

Opposite the island are stove and sink beneath a large window overlooking the deck. On the east side of the rectangular kitchen are numerous cupboards and windows overlooking the yard and barn. Tucked in a corner are a desk and electronic accoutrements, computer and printer files. In the center is a large round table and chairs with a view of the side yard and a large deck constructed on two levels; one level holds a hot tub and cooking area, the other level has wide stairs leading to the back yard, gardens, and tables for dining.

The basement is mill-cut timbers and mill-cut floor joists. There is a rubble stone foundation and crawl space. The home exterior is constructed with cedar clap-boards; the interior floors are maple and oak. The doors are trimmed with chestnut wood; this is noteworthy because, by the end of the Civil War, a blight had killed off the American chestnut; it is unusual to have an original door in this wood. Additionally, the hinged entrance doors have center-mounted door chimes indicating a home dated between 1865 and 1890. There are cut glass door windows at the side of the north entrance. Some interior doors are the double-hinged type used in the early 1900s. The windows are new and are eight over eight, all in Victorian style.

The barn is a phenomenal example of an early Chili barn measuring approximately 30′ x 100′ with a gambrel roof and racking supports, most likely built before the main house. It has hand hewn beams, complete milking stanchions and stud stalls for the cattle. The second floor is quartered with complete box stalls for two-horse team draft horses.

The grounds contain an herb and flower garden, fruit trees and vegetables. Around the tool shed are black walnut and maple trees and, and planted to keep the milk house cool, are a grove of American bamboo trees.

Seated on the deck, we viewed the entire property, and were afforded a historical glimpse into what really made a farm–barns, the berry patch, vegetable garden, and hardworking people.

Mrs. Foley had one more surprise for us. She appeared with a little black box with golden trim where one keeps their most important papers. Inside the box were all the property abstracts from the time when the abstract was for 3000 acres—a complete historic record of the property.

The families who have lived here passed down a bit of folklore about an original two-room cottage on the property with indoor plumbing. It was called “the rabbit house” where children used to play. Mrs. Foley’s grand and great-grandparents lived in West Chili at Buckbee’s Corners. Her great grandfather owned the blacksmith shop, now a part of Genesee Country Museum and called The Tin Shop. Their family names were Taylor and Mayer. Sandra’s roots run deep in Chili.