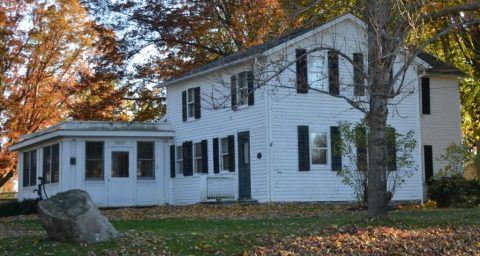 In 1993 Scott and Katherine Dasson purchased this two story home and a barn on ½ acre of land. Their vision was to restore the house but it soon became both a restoration and a renovation project.

This home has a rubble stone foundation with beams cut out of round hand-hewn logs. The outside of the house is sided with wide vertical planks and batten strips. The interior has hardwood floors throughout. There are five rooms on the first floor and three rooms on the second.

The property also contains a two-story post and beam barn that dates back to 1914. Near the house is a twenty-five foot hand dug and rock lined well which is identified by the cast iron pump.

The Dassons have replaced the porch and almost every interior door with antique five panel latch doors, built an addition to the kitchen and renovated a bathroom. Previous families include the Groves, Teschs, Kibbies, and Moffetts.