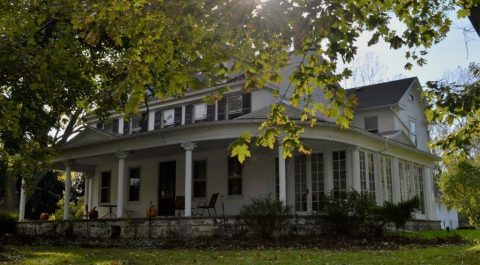 This Meadowbrook farmhouse is located just south of the intersection of Buffalo Road and Union Street on the west side of Union Street. The original owner deeded the land across the road for a school (No. 6) which sat on the site of the present fire department building

The first owner was Richard Cate who purchased the property in 1830. Subsequently, several generations of Cates lived there. A number of other families located there before Ron and Naomi Garwood took possession in the 1980s.

The Federal style brick structure has a porch across the entire front that wraps around its north side. The entrance door is beveled glass and has five bay windows; stately Doric columns also grace the front. The south side of the house has a large portico which was used for carriages. A wing on the back replaced the original footprint of the house.