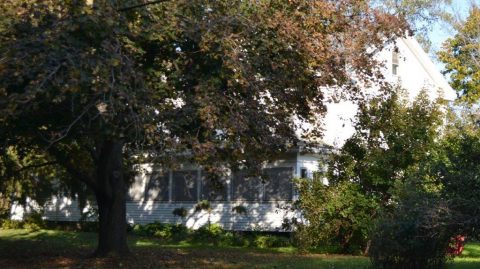 This house is a classic Greek Revival complete with all the distinctive characteristics, the low pitched gable roof, cornice lines surrounding the house just below the roof line. There is a one story wing on the south side which, in the Greek Revival design, is usually lower than the dominant front gabled portion. In this case, however, the single story was enlarged to include a second story.

Because the two windows on the front gabled portion of the house are different sizes, the larger window may have originally been the entrance. The classic Greek Revival was a dominant style of American domestic architecture from the 1830’s to the 1860’s, so popular in fact that it was nicknamed the National Style.

The house was built to include three bedrooms and a large bathroom. Each bedroom had a closet and heat runs, both luxuries at the time. The newer south wing contains three more bedrooms and a stairway that leads down to the kitchen.

A beautiful golden oak main staircase leads to the main foyer and on the north side of this space is a large parlor with a small adjacent room. The foyer is the center of the house and also opens to a second parlor which features a lovely fireplace with a golden oak mantel and surround. Parallel to this room, to the rear, is the dining room whose centerpiece is a beautiful Chippendale dining room set.

The modern kitchen opens to the attached woodshed and is directly adjacent to the family room. This room has a large bow window with a padded window seat that overlooks the horseshoe driveway. Outside, a privy (outhouse) still stands, as does a smoke house, a garage with an old-fashioned gas pump, a toolshed, corn crib, chicken house, turkey house, pig house, and a new pole barn. Down the lane that leads to the pastures stand two silos-all remnants of a large working farm that supported three generations of the Craw family.