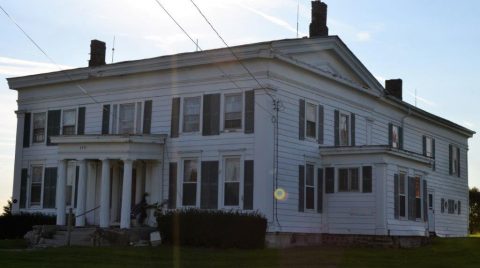 The original farm had 256 acres and was owned by the Fellows, a family of 12. There were seven outbuildings (including the privy) on the land on both sides of what was then called Braddock’s Bay Road. A print of the farm can be found in The History of Monroe County 1788-1877 (Ensign and Everts, authors). The Fellows family was involved in the community, politically and philanthropically. Benjamin Fellows was, in fact, a Chili Town Supervisor.

In the 1940s the land was bought by the Alexander family. Both this classic Greek Revival home and the property’s stately Wells barn are landmarks in our town. The barn is featured in our photo book, The Barns of Chili. The front portico is supported by graceful Doric columns; the steps and floor of the portico are of blue stone. The massive three-inch mahogany front door is eight feet tall and forty-two inches wide and includes the original white porcelain doorknob and keyhole cover. The house proper encompasses 3600 square feet of living space.

This home was built around the same time as the Widener home at 4280 Union Street. Inside the foyer of the home, Peter Widener noted that the banister on the long stairway had newel posts and balusters exactly like the ones in his home-an indication that both may have been built by the same carpenter. The parlor has a decorative fireplace with side panels of molding and tiered moldings beneath the mantle. The seven foot doors have elaborate trim that indicated the prosperity of the owner. Carl Schmidt’s Greek Revival Homes provides further information and drawings of this feature.

The back section of the house, the west wing, is accessed by a foot porch with flooring of the same blue stone as the front porch. In the original farmhouse kitchen there was a twelve foot fireplace and beehive oven. It was at least six feet deep. As a young woman, Mrs. Alexander could climb into the oven to clean it. It is presently enclosed but can still be seen from the woodshed behind this room. In this section of the house there is also a butler’s kitchen, dining room, and bedroom. Originally, the bedroom was a laundry room with washers run by pulleys powered by electrical motors.

This property now is known as Cragie Brae Golf Club and consists of forty-five acres. The clubhouse occupies the Wells barn. The course opened in 1962 and today is a popular attraction for many local golfers.